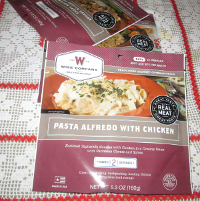 I'm doing a taste of Wise Food review. I recieved a shipment of Wise Food recently, and have been indulging in some new taste experiences. I'm going to take you along vicariously, - if you are willing - to sample these freeze dried meals with me.

First, I should explain that Wise Food is a company that provides freeze dried food and fire, etc., for times of disaster or hey, whenever you feel inclined! I see more options now than ever before. Take these along for hiking or camping. Or - in the dorm room of a student who hates to cook!

I spread out several of these mylar pouches, and finally made a decision - Pasta Alfredo with Chicken would be my first taste of Wise Food.

Next step: cut it open.

(By the second or third meal, I actually read the line on the top that said to tear it open at the notches on the sides. Well, that worked mostly, but a few times my fingers just did not seem to be strong enough to tear it, so I needed a scissors.) 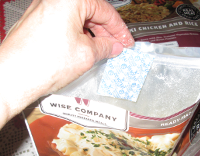 Of course, I pulled it open and looked inside. There was a small packet. I pulled it out and had a closer look.

Oh. It said that it was a desicating packet, taking oxygen out of the mylar pouch, and it was to be removed and not eaten under any circumstances.

All right, then into the garbage with it. 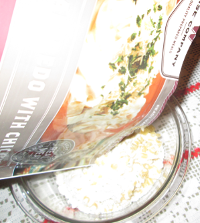 Well, I saw the spot that said it was two servings, so I fetched down a bowl that would hold about two servings, and I emptied the contents of the pouch into the bowl. 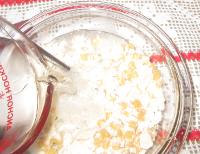 ! added the two cups of water, per the instructions on the back of the shiny bag. I stirred the water in, and then realized that I now needed to cover the bowl and let it sit for 15 minutes.

I got a few other small duties done in my kitchen during that time, but - whoa, those seemed like a long 15 minutes. Guess I was just plain impatient. 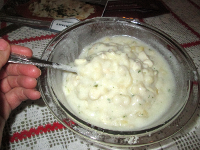 Now here's my reaction; this tasted great! Rather soupy, so I was glad I'd put it into a bowl rather than a plate, but it tasted so good I finished it all up and decided I needed nothing else. I was full!

Looking at the package again, I realized that I had really eaten both servings myself. I should perhaps have saved half of it for another meal. Oh-well... 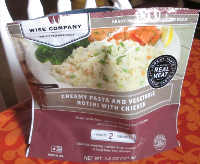 The next day for lunch at the office, I went again, through this hardest part - choosing which meal to have! This time it was creamy pasta and vegetable rotini with chicken, which would be my taste of Wise Food.

Normally, I don't eat one meal after another with pasta in it. I like to alternate a bit. But these meals are tasty, and easy to spoon up. Pasta probably lends itself best to being freeze-dried and then reconstituted with hot water. Wise Foods does offer other types of food too.

Once more the meal was rather watery. I decided that perhaps I could put in less water in the future. Anyway, I ate it as a soup, and it was delicious!

I was on a roll. So for supper I had another "taste of Wise Food". This time it was teryaki chicken and rice. (I began to worry about becoming addicted!).

Sure enough. Putting in just one and a half cups of boiling hot water now gsve me a texture I like better. Hmm..! I can adapt for my taste of Wise Food!

The next morning, when I weighed myself after my bath, I found that I had gained 2 pounds in just two days. I decided that I would have to eat some of my other, healthy salad meals for a few days and spread out how often I was indulging in these rich and tasty pasta meals. Especially since I was eating double servings!

Honestly, with the teryaki chicken and rice, I tried to divide the food into two portions and put one aside in the fridge. But when I'd finished the first serving, I got up and fetched the second one. (Where has my self-control gone?) 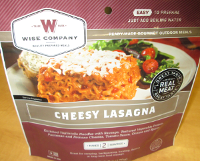 You may be getting weary of this vicarious spree of my tasting of Wise Food. I have eaten seven of these meals now, though I failed to take photos of every stage. The last one was cheesy lasagna, which I ate at lunch with a number of other friends at the office, and they were rather curious, so I was able to brag on these tasty Wise Foods and recommend them highly. One studied the ingredients on the mylar pouch and commented on the high sodium content.

Well... Perhaps that's why it tasted so good.

Nothing negative at all?

Need to learn more about shopping online? Sign up for my free email course that explains things in greater detail.

The only thing I can think of, besides the facts that I couldn't resist eating both servings, and that having three pasta meals in two days made me gain weight, is that ocassionally I found about one piece of pasta, or veggie, that was hard and not truly reconstituted. (I can imagine that might be a major problem with creating these meals - so it could have been worse).

I really cannot think of any other negative points. With cautions about pigging out on these meals without any other variety, and maybe exercising better self control, so that you only eat ONE serving per meal, -- (unless you are a large person and normally eat big servings), -- I can heartily recommend these products based on my taste of Wise Food.

[Disclaimer: This site has many affiliate links; so I may profit if you click a link and make a purchase].

Want to see my SBI TV?